The Jim’ll Fix It survivors’ club

My comedy show at last year’s Edinburgh Fringe was something of a cathartic experience.

For years I’d hidden my minor, shameful involvement in what has become a British institution. When down the pub with friends, I kept quiet when the inevitable subject of classic children’s television came up, until one night I took courage and confessed. You see, when I was fifteen… I became mentally scarred … I was a victim of Jimmy Saville!

Yes, Sir Jimmy Saville O.B.E. K.C.S.G. L.L.D. F.R.C.R., not to mention O.L.D. G.I.T. Now I don’t know what you Ouch readers think of the guy – TV presenter? DJ? Do-gooder? – but like many disabled people with whom he had transitory relationships in front of press and TV cameras, I hate the b*****d!

You see, Jim never questioned whether we actually wanted him to run all those marathons for charity. He claims to have raised £40 million during his lifetime, but how on earth could he know the exact amount? I can almost imagine him pulling out his calculator every time he got another fiver and adding it to the running total for Stoke Mandeville!

People who have experienced our oppressive mental health service in the UK have adopted the term ‘Mental Health System Survivor’ to describe themselves. In other words, they have survived the screwed-up system that they were forced to endure.

Well, I’d like to borrow that same terminology to describe my own experience – I am a Jim’ll Fix It Survivor!

The series ran for 20 years and, as I’ve already mentioned, he picked on disabled people, so there must be a lot of us around.

Every time I did my stand-up show, I’d ask if there were any Jim’ll Fix It Survivors in the audience – so far I’ve located two. There’s John from the north-east, who had Jim pose for a photo with him and his broken wheelchair – he didn’t fix it though! There’s also a woman in London (she wishes to remain anonymous) who had Jim push her 26 miles in a marathon. She said it was really quite boring, as Jim only spoke to her when the cameras were around. It seems he’d do practically anything for a photo opportunity.

By doing the shows, I hoped some day to form a network. I thought we could band together, support one another and help ourselves come to terms with our experiences. Either that or we could all bung a tenner in the kitty and hire someone to shoot him! I know which option I’d prefer!

In 1990, Jim’ll Fix It was running out of steam and nearing its end when my class at school appeared on it. We were on Saturday night TV sandwiched between a boy becoming invisible, a father joining a Mariachi band, a swotty kid managing a cinema and a little girl making cheese (as if the show wasn’t cheesy enough). 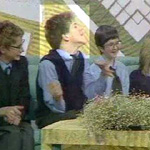 Here’s my proof that I’m a Jim’ll Fix It survivor. The ‘Dear Jim’ letter asked for a helicopter to land at our school and take away our French teacher – a simple enough request, you might think? But Jim didn’t do as we’d asked. He thought the public couldn’t possibly cope with seeing empowered disabled kids playing a trick on their teacher, because where’s the charity angle there? So he spoilt our surprise by telling our teacher. Jim thought it would make him look better if he surprised us – the disabled kids – with the helicopter instead.

But even back then we could see how patronising and manipulative the whole thing was. So when we got to sit on the sofa with him, and he declared, “You all have to pay £13,650 for your teacher’s day out!” I replied, “Get lost!”

The rules of Jim’ll Fix It are quite simple. There are two main types of fix-it:

But Jim fixed it alright: he changed the rules to suit himself. I don’t want to go on about it, because my friends keep saying to me: “Laurence, it’s been 14 years! You’ve got to let these things go – YOU DIDN’T GET THE BADGE!” So eventually they clubbed together to give me this.

They thought that giving me a pathetic piece of card tied with red ribbon would shut me up. As you can see, they were sadly mistaken!

Now you may be thinking that I’m being a little hard on the guy – after all, he did give my French teacher a helicopter ride and, of course, the badge. But every time I’m patronised, patted on the head or not taken seriously, I blame the charity image of disabled people perpetuated by the likes of Jimmy Saville.

Ultimately, the person whom Jim was really fixing it for was Jim. Indeed, he should have been giving himself all those Jim’ll Fix It badges! He could have hung them all around his neck, jangling about. They would have gone quite well with that other crap he wore!