The Jim Davidson Guide to Equality

Laurence Clark is keen to see Jim Davidson take over Tony Blair’s role as PM. He talked to dao about some of the stuff that makes him tick. 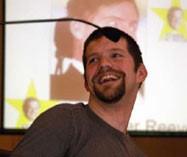 Laurence live in Liverpool in 2003

What makes you laugh?
Lots of different and varied stuff makes me laugh. I am a huge fan of 1970s sitcoms, and regularly piss my wife off by watching endless repeats on UK Gold.

In particular, I admire Steptoe and Son as a brilliant example of comedy derived from characters. I also love comedy that focuses more on the minutiae of life, the small things which drive us mad. Dave Gorman is brilliant at this, and I’ve just discovered Larry David’s show Curb Your Enthusiasm which is just about the only thing I regularly watch at the moment that makes me laugh out loud.

There was a scary moment in the last episode that I watched where he moaned to his wife about not buying Colgate toothpaste – I’ve had this exact same argument in my own marriage. I’ve warned my wife that I will turn into him in another twenty years time!

Where would you most like to perform?
I found performing to 3000 people at the Liberty Festival last year incredibly difficult, as it was impossible to cultivate any sense of intimacy. For similar reasons, I don’t like performing outdoors in general.

I’m looking forward to my tour, since most of the venues booked are around 100 seat theatres, which is where I’ve found my comedy works best. One day I would really like to perform in the Edinburgh Festival at the Pleasance, as I think my style would go down well there and it attracts a lot of people. However, on principle it would have to be made accessible first.

Who would you most like to perform alongside?
A difficult question to answer. In the past I’ve performed a number of times on a double bill with the Nasty Girls. I think this worked quite well, as we both do political comedy but have very different styles.

However, due to the financial logistics of touring, this isn’t very practical now. It would be easier to answer the question of whom I would least like to perform alongside – Jimmy Carr, who seems to have taken over Graham Norton’s position of Mr Channel Four!

In my opinion, Carr uses post-modernism as an excuse for telling the same old prejudiced jokes that comedians used to get away with. Last year at the Fringe I called him a disablist c**t in an interview. On the last night of the Fringe I spotted him in my venue, stood next to a shredded poster for my show. Maybe I touched a nerve?

What’s the biggest compliment you’ve received as a comedian?
Liz Carr from the Nasty Girls once compared me to Dave Gorman.

I received one review from Fest magazine where a number of disabled performers were reviewed together. The review said absolutely nothing good or bad about my show. It seemed like a token gesture to say that they’d covered us.

To cap it off, it was accompanied by a less than flattering cartoon sketch of me. I guess they didn’t like my show but didn’t have the guts to write a bad review of a disabled performer.

How do you find touring?
Touring is a little difficult; particularly, since we also have a teething baby at the moment. This is why my dates are spread over four months, so that I won’t be away from home for more than one night.

The timing is also important as the show is essentially a fake election campaign to persuade the public to vote for Jim Davidson to be Prime Minister. He may be bad, but I set out to prove that New Labour is worst on disability equality issues. Therefore, it will be fun to tour during the run up to the real general election.