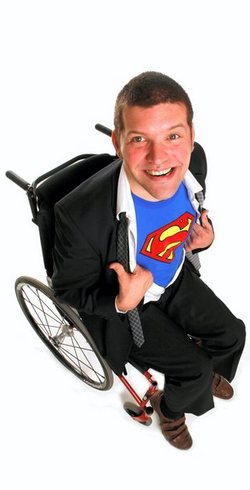 The posters at Soho Theatre advertising Laurence Clark’s latest show, ‘Spastic Fantastic!’ are bound to raise a few eyebrows. But the 34-year-old comic, who has cerebral palsy (CP), says people shouldn’t be offended. ‘I’ve had that word thrown at me all my life so if anyone’s got the right to use it and turn it into something positive then I have.’

‘Also, using un-PC language and playing around with words that people feel uncomfortable with is a natural area for comedy. But, obviously, it’s not just about the words, it’s about who’s saying them and what the intention is,’ he says. ‘Black people use the “N” word, but that doesn’t mean white people have the right to go around using it.’

He feels the same applies to non-disabled people using words like ‘spastic’. ‘Some comedians use that word willy-nilly. Look at Brendon Burns. He uses it nearly every sentence. It’s like if you say “fuck” a lot you get more laughs because people are drunk. Effectively, it’s just a way of saying “laugh here”. ’ Disabled readers of the BBC disability website Ouch!, for which Laurence is a columnist, voted ‘spastic’ to be the most offensive disability-related word in the English language. ‘So I thought it was high time to take a stand and attempt to reclaim it.’

Indeed, who better to do it? After all, Laurence went to the Percy Hedley School for Spastics, as it was known before the word became non-PC, and was taunted by kids from other schools. ‘I was always labelled a spastic,’ he says. ‘So for me this is like my Holy Grail.’ Although the starting point for his most recent show is reclaiming the word ‘spastic’, Laurence doesn’t get too hung up on language.

He uses the language theme as a platform from which to ridicule what he sees as a damagingly politically correct, media-driven society, which focuses too readily on the ‘appropriate’ terminology, rather than supporting disabled rights or tackling the ignorant attitudes that many people still possess.

‘Words are quite easy to get right but behaviour is a lot harder,’ Laurence says. ‘There are big charities out there that have learnt all the right words and present a very glossy image of what they do, yet they often won’t employ disabled people or look properly at what’s going on behind the scenes.’

It’s injustices like this that have helped give him the drive and the material to put together four previous Edinburgh shows. In 2003, Laurence won critical acclaim with his first one-man show, ‘The All-Star Charity Show’, which he performed as part of the Disability Arts Festival within the Edinburgh Fringe. He followed up this success with subsequent festival hits, ‘The Jim Davidson Guide to Equality’, in 2004, ‘Jim Fixed It For Me’, in 2006, and ‘Twelve Percent Evil’, in 2007.

In ‘Spastic Fantastc!’, Laurence, who has a PhD in Computer Science, intersperses conventional stand-up with video clips and the occasional Powerpoint slide. He credits pioneering ‘documentary comedian’, Dave Gorman, for showing him ‘a way to do comedy and actually make it work.’

David Cameron and supposed ‘disabled role model’ Heather Mills, get a good going-over. He also jokes about being thrust into the public eye three years ago, when Cherie Blair reportedly said to him: ‘Are you a stand-up comedian or a sit-down comedian?’ Laurence didn’t know what all the fuss was about. ‘It was a non-story but an opportunistic photographer took a photo and overheard the comment and thought “I could make 500 quid from the Daily Star”,’ he says. ‘It’s a crap joke. It’s not offensive. It’s just not funny.’

He’s also not a fan of people treating him as a charity case. In one hidden-camera stunt he is filmed rattling an increasingly ridiculous series of charity buckets to show that passers-by would give him money, even if the bucket reads ‘Pay off my mortgage’ or ‘Kill the puppies’.

He finds it frustrating that such humour is too controversial for mainstream TV executives. ‘I pitched the charity bucket sketches to quite a few TV companies all of whom thought it was too edgy.’ Laurence says their reluctance comes from being too scared of complaints. ‘But whatever you do about disability you are going to get complaints from someone,’ he says, ‘in which case why not do good stuff?’

There are plenty of good disabled comics around to do it. Laurence is one of several who have sprung up in the past few years and are doing well in mainstream comedy. So which other disabled comedians does Laurence recommend?

‘Liz Carr, she is very edgy. There’s pretty much nothing she won’t say,’ he says. Thirty-four-year-old Carr, who reached the finals of both the Hackney Empire and Laughing Horse ‘New Act of the Year’ competitions in 2007, has a rare condition which confines her to a motorised wheelchair. She presents a regular podcast for Ouch! alongside Laurence and clearly comes from the same school of thought, believing disability is the ‘bastion of political correctness’ and unapologetically using words like ‘spaz’ and ‘crip’ onstage.

Is this recent development a natural progression from the emergence of alternative comedy in the 1980s? ‘Well, as comedy goes on, more and more taboos are broken. Go back 30, 40 years you had white, non-disabled men, who were pretty much the only comedians around, doing jokes about their wives,’ Laurence says. ‘Mind you I do that!’

‘But it’s interesting that we have all only sprung up in the last seven or eight years,’ he says. ‘I think it has a lot to do with the fact that the venues are a lot more accessible so we can actually get work now,’ he says.

Until changes enforced by the Disability Discrimination Act 1995, very few comedy clubs had disabled access. ‘Go back ten years, there was nowhere for us to perform. Most venues were inaccessible, unless you were prepared to have a security guard carry you up the stairs.’ 2004 was the legal deadline for public buildings to become accessible, which Laurence believes had a big impact.

In the show, he mocks a review he received last year that he feels patronisingly praises him for ‘raising awareness’, to which he deadpans: ‘I thought the point was to be funny’. That he certainly is.

But, while he may be averse to ‘awareness’ as a term, he does ‘raise’ it just by being there, on-stage, even if his main goal is to make people laugh. One of the ignorant misconceptions about CP is that the condition means all sufferers are not merely physically disabled, but intellectually disabled as well.

Nobody who sees Laurence’s show could be under this misapprehension. His clever material and captivating wit destroy any such myths entirely.

Laurence Clark, ‘Spastic Fantastic’ is at the Soho Theatre, April 9-11.