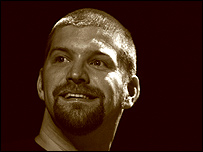 Comedian Laurence Clark is about to open a new show in Edinburgh which deconstructs some of the assumptions about disabled people and asks the audience to see the world from his perspective.

Clarkhas disabilities caused by cerebral palsy – he is a wheelchair user and his speech has the characteristic drawl of some of those affected by CP.

It is something that he tends to dispense with at the beginning of his act:

“I’m not pissed,” he tells the audience.

“This is actually how I talk – if you’re struggling to understand me, tough s**t!”

It is typical of his direct, no-holds-barred approach to disability and signals to the audience that they are not about to hear an hour of politically-correct comedy.

His new routine – Twelve Percent Evil – uses a mixture of stand-up comedy interspersed with video clips and the occasional Powerpoint slide to take a close look at some of the stereotypes around disability.

For example, he asks whether it is right to see disabled people as pitiable, brave, invisible, comical, charlatans, charity cases and scroungers.

And he is keen to discover why so many infamous villains have disabilities in order to make them even more sinister – Richard III, Long John Silver and Captain Hook.Clarkadds Heather Mills-McCartney to the list as well.

Some sequences in the show have been filmed on the streets ofLondonusing a hidden camera.

The nature of disabled people’s invisibility is demonstrated by having him trying and failing miserably to hail a cab.

He takes a similar approach to disabled people as passive recipients of charity. He is seen sitting in his wheelchair with an increasingly bizarre series of collection buckets to test the notion that passers-by will part with their money because of his disability.

The first bears the slogan “pay off my mortgage”, but the fake causes degenerate until he is seen waving a bucket with a picture of a cute labrador with the words “kill the puppies”. 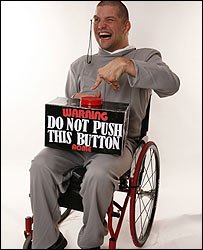 Clark asks why does being disabled give villains a sinister edge

Needless to say, there appears to be no shortage of willing victims to help him to prove his point.

Comedy is something that was always close toClark’s heart but he always had a backroom role in mind.

“Obviously having a speech impairment live performance was something I didn’t think I could do,” he told the BBC News website.

“I’ve been writing comedy for longer than I’ve been performing it but it’s very difficult as a writer to break through because there’s so much competition out there.”

He sent unsolicited scripts to various organisations, including the BBC, but none was ever used.

“So then I thought if I’m going to get anywhere I should try performing the material myself.”

But he feels that his speech impairment is continuing to hold him back. Despite bitingly funny gags and superb comic timing he is still playing to small audiences in arts centres and minor theatres.

Having made something of a name for himself in alternative comedy, he says he would like to return to writing – either for other live performers or perhaps a television sitcom.

“There’s yet to be a decent sitcom with a prominent disabled character – I think there’s so much room to do stuff that’s not been done but TV is quite cautious about how far it can go.”