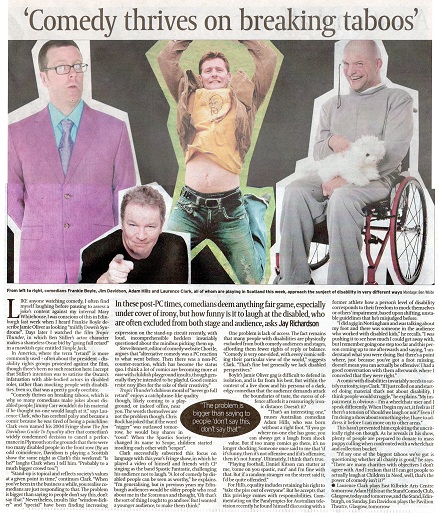 Like anyone watching comedy, I often find myself laughing before pausing to assess a joke’s content against my internal Mary Whitehouse. I was conscious of this at the Festival Theatre last week when I heard Frankie Boyle describe Jamie Oliver as looking “mildly Down’s Syndrome”, then several days later watching the film Tropic Thunder, in which Ben Stiller’s actor character makes a shameless bid for an Oscar by “going full retard” in an overblown, mawkish epic entitled Simple Jack. In America, where the term “retard” is more commonly used, often with application to the president, a coalition of disability rights groups have protested against the film, though there’s been no such reaction here.

Although I didn’t find the Simple Jack sub-plot as funny or as interesting as Robert Downey Jr.’s white method actor blacking up as an African-American, I accept that Stiller’s intention was broadly to satirise the Oscars’ infatuation with able-bodied actors in disabled roles, rather than mocking people with disabilities. Even so, that was a pretty goofy overbite.

“Comedy thrives on breaking taboos, which is why so many comedians make jokes about disabled people,” claims Laurence Clark, who has cerebral palsy and became a comic because he was tired of being a punchline. “Jimmy Carr wouldn’t do his material if he thought no-one would laugh at it. Stand-up is topical and reflects society’s values at a given point in time. When you’ve been in the business a while, you realise comedians are just responding to that. The problem is bigger than saying to people don’t say this, don’t say that.”

Nevertheless, insults like “window-licker” and “special” have been finding increasing expression on the stand-up circuit, with loud, incomprehensible hecklers invariably questioned about the minibus coming to pick them up. Steve Bennett, editor of comedy website Chortle argues that “alternative comedy was a PC reaction to what went before. Then there was a non-PC counter-reaction which has become the status quo. I think a lot of comics are becoming more at ease with childish playground insults, they’re definitely more common, though generally they’re intended to be playful. Good comics resist easy jibes for the sake of their creativity.”

Tropic Thunder’s dubious moral of “never go full retard” enjoys a catchphrase-like quality though, and it’s likely that it’s coming to a playground, or indeed office, near you. The words themselves are not the problem. Chris Rock has joked that if the word “nigger” were outlawed tomorrow, he would buy shares in “coon”. And when the Spastics Society changed its name to Scope, it was inevitable that children would start insulting each other with “scoper”. Clark successfully subverted this focus on language with his Edinburgh Fringe show, in which he played a video of himself and fellow CP sufferers singing as the band Spastic Fantastic, challenging his audience not to laugh.

“A lot of comedy by disabled people can be seen as worthy,” he explains. “I’m generalising, but in previous years my Edinburgh audiences would be older people who read about me in the Scotsman and thought ‘oh that’s the sort of thing I ought to go and see’. But I wanted to attract a younger audience, to really make them think.”

After several years of strong Fringe reviews, Clark resents his lack of broadcast exposure, having been generally restricted to programmes about disability. But he is pragmatic about being unable to perform in most comedy clubs and points to the growing number of venues, including the Pleasance at this year’s festival, that can accommodate his wheelchair. Yet the fact remains that many people with disabilities are physically excluded from both comedy audiences and stages, affording them fewer rights of reply or balance.

“Comedy is very one-sided, with every comic selling their particular view of the world,” he suggests. “That’s fine but generally, we lack disabled perspectives.”

Boyle’s Jamie Oliver gag is difficult to defend in isolation and is far from his best. But within the context of a live show and his persona of a dark, edgy comedian that the audience demands attack the boundaries of taste, the excess of offence affords it a reassuringly ironic distance. Doesn’t it?

“That’s an interesting one” muses Australian comedian Adam Hills, who was born without a right foot. “If you go where no-one else has gone, then you can always get a laugh from shock value. But if too many comics go there, it’s no longer shocking. Someone once said to me that ‘if it’s funny, then it’s not offensive and if it’s offensive, then it’s not funny’. Ultimately, I think that’s true.

“Playing football, Daniel Kitson can stutter at me, ‘come on you spastic, run!’ and I’m fine with that. But if a random stranger on the street said it, I’d be quite offended.”

For Hills, equality includes retaining his right to “take the piss out of everyone”. But he accepts that this privilege comes with responsibilities. Commentating on the Paralympics for Australian television recently he found himself discussing with a former athlete how a person’s level of disability corresponds to their freedom to mock themselves or others’ impairment, based upon shifting, unstable guidelines that he’s misjudged before.

“I did a gig in Nottingham and was talking about my foot and there was someone in the audience who worked with disabled kids. I was pushing it to see how much I could get away with, but I remember going one step too far and this person coming up to me afterwards and saying ‘listen, I completely understand what you were doing. But there’s a point where, just because you’ve got a foot missing, doesn’t mean you can actually be offensive’. I had a good conversation with them afterwards where I conceded that they were right.”

“If I just rolled on and started doing material that’s not about disability, I think people would struggle,” he explains. “My impairment is obvious – I’m a wheelchair user and I speak differently. When I begin my act, it feels as if there’s a tension of ‘should we laugh or not?’ Even if I’m doing a show about something else, I have to address it before I can move on to other areas.”

This hasn’t prevented him exploiting the uncritically right-on though. As he reveals in his show, plenty of people are prepared to donate to mass puppy culling when confronted with a wheelchair and collection bucket.

“I’d say one of the biggest taboos we’ve got is questioning whether all charity is good,” he says. “There are many charities with objectives I don’t agree with. And I reckon that if I can get people to actually laugh at Children In Need, well, that’s the power of comedy isn’t it?”